Ever since becoming a Dad, I made a promise. If my kids want to go to church, we will go. 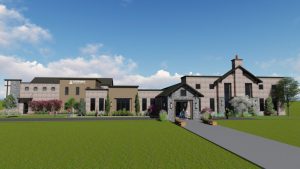 This past Sunday, we were doing our normal weekend morning routine: kids destroying the house and me trying to get the sleep out of my eyes. It had been a busy week and the Titans were playing at noon and I was thinking about just having a chill morning (no church)

All of the sudden, E said “I want to go to church today”.  I hope I didn’t grunt and the first thing I said was “okay”. So we were off to the races.  I hadn’t planned on making them food so quickly or getting them both dressed (Lincoln wanted to come too). I had to figure out if we would allow them back into Gateway Kids for the first time since COVID started. Would one go? Would both go? So many decisions to make.

Of course, we got ready in record time and headed out the door.

I remembered something my Mom did as a kid that was such a small act but it was so consistent that it created a memory that has lasted. We went to church most Sundays growing up. Church was BORING. 1 service and there was no end time – it just ended when it ended. My Mom would always give my sister and me change or money to put in the collection plate. I had no idea what the money was for. I think I wanted the money so I could go buy a new toy or some baseball cards. I don’t think even in all the time I went to that church (even into high school) that I thought about what collections actually were. I knew what tithes were but I didn’t know that a church is kinda a business too (well, they DO have bills to pay).

Anyway, back to church. We are sitting in the old main sanctuary and watching service on a big screen. Just not ready to mingle with the main crowd – plus with both kids there, there was going to be some running around and screen time needed.

At the end of service, I gave them each a few coins to put into the collection plate. It was so busy after service that I didn’t get to explain to them the action and the way. But I will.. 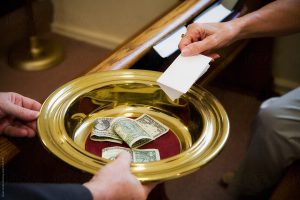 And hopefully, it’ll be a memory they will carry with them into their 40’s.