I am a black man who went to a mostly white K-12 school system and then a mostly white K-12 college. And I work in a field that is…well, you get the jist. I, however, have to straddle both worlds because on the outside I still look different. I’ve made my peace with it and tend to generally ignore world events for my own sanity and because I narrow my world to only the ones I know and love.

My daughter and son are in a daycare that is mostly white(actually all white, except for them) in a mostly white city, neighborhood and community…stop me if this is sounding like deja vu.

I was stopped in my tracks by something that happened the other day on a little daddy-daughter outing. I know this will change in the future and as she ages but for now, I want to bottle up this innocence and spray it whenever life gets touch.

My daughter picked out this doll at the store the other day because it looks like her. Because of the hair. 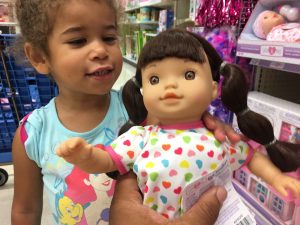 Why can’t it just always be this simple?